Sorry. Yes, we have let you down 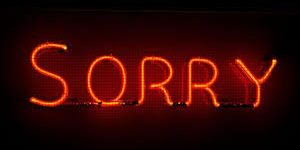 Sorry is not a word we often hear from people in leadership.

When I make mistakes or got something wrong, my initial default response is often to get very defensive and feel a bit little humiliated. Then I want to blame and get angry and even fight back. Not always great for building trust! I am better than I was, but I still don’t enjoy having my mistakes and shortcomings pointed out. I am not always immediately open to learning.

One of the CEO’s I guide leads a tech start up, going through a massive initial growth phase, literally from conceived idea to $1m a month turnover in just a few months. He operates in the travel sector, and started the platform in the midst of a pandemic, when no-one was flying! No mean feat.

But while some clients were thrilled and very happy with the platform and the results but there were also a number of complaints from some other clients. His initial reaction too was to get defensive, and he wanted to fight back with the equivalent of “But can’t you see we are doing our best!? Other clients think we are great, what’s wrong with you? Can’t you cut us some slack?”

The platforms initial growth and success even took him by surprise, and we had likened it to a train getting ahead of the tracks that were still being laid down. Consequently though, the infrastructure was still not yet in place for the level of customer service that he wanted to deliver. There were significant growth pains.

We talked about how much he didn’t know. He was brilliant in what he did, and that didn’t immunise him from being regularly blindsided, and every day having to deal things he hadn’t anticipated and problems he didn’t fully understand.

As we talked, it became clear that instead of wasting energy and time being defensive and fighting with clients, he felt that the high integrity thing to do would be to simply acknowledging to those clients that they weren’t getting a great service. He wanted to apologise to them, and even make a refund to some of them, even if he still felt that was unfair to his own company.

What I love about this man as a leader is his genuine humility, and his openness, his willingness to learn rather than beat himself up or punish himself for any length of time. Neither did he want to make his own clients wrong. I honoured his desire to learn and grow from every situation, even, and maybe especially, the most difficult ones. I find him inspiring. He coaches himself and allows himself to be coached.

So when we reflected, what did he learn?

He modeled integrity and how to rebuild fractured trust by simply saying, “You are right, we have let you down,” and in doing so, also saved himself and his team a lot of heartache. His own energy levels rose again, and he got re-inspired.

The client then came back to him and thanked him for his honesty and re-affirmed their desire to continue building a long-term relationship together. They were heartened by his openness and his undefended acknowledgment of the problems, and his commitment to fixing them.

We all have blind spots, make mistakes, get confused and miscalculate. These things are human, tedious and inevitable. The only real question is, “Do we deal with them with integrity or not?”  Can you say, “Ouch,” and feel bad for ten minutes and the rectify and move on. Demonstrate a simple humility, exercised through an apology, and then carry-on rebuilding trust.

Would you like a conversation about the integrity of your own leadership? Drop me a line at nick@iamnickwilliams.com and we’ll arrange that

The power of your self-reflection
February 8, 2023

Are you naturally inclined to find the pearls of wisdom in the grit of your life?
February 6, 2023

In the presence of wisdom – the gifts of my evening with Desmond Tutu
January 9, 2023

What is the point of carrying on?
December 29, 2022
Recent Comments
Key Messages