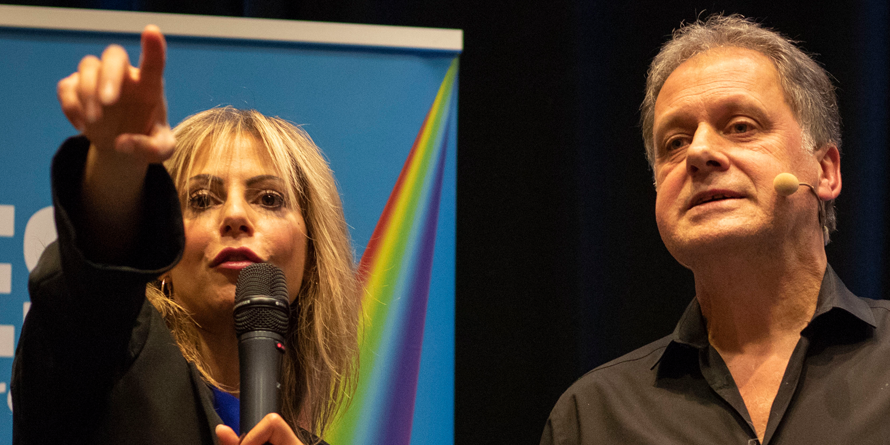 I have been speaking publicly since the late 1980’s. I began by giving talks in the front room of my flat, at the time, in Fulham.

From the outset, I have loved sharing messages, but would often go through periods of anxiety as the time to speak approached, sometimes really chronic anxiety.

But I also began to notice that the me that was full of fear and anxiety right up the moment I stood up to speak soon gave way to another me once I started speaking. There was another more confident me that seemed to click in, and this me had fun, and was really in the flow. I began to notice the same thing with my writing. I wouldn’t always feel like writing, and could feel uninspired, but by making the decision to actually sit down and write anyway, after a while, that other me would click in and the ideas would begin to flow, seemingly from nowhere.

I now think of that something as The Muse.

It took some time before I realised that this is an integral part of being creative, and the territory of stewarding. I recently watched the comedian Billy Connolly talk about his life in Comedy on a BBC Maestro Masterclass and was thrilled to hear him describe his own experience. He said, “I can go on stage not knowing what I am going to say, because I have done it millions of times. I trust it. There’s another power at hand here. It’s like a spiritual power. It takes over and changes my character. I can’t explain it. I know how it feels and I become an inflated idea of myself. I become confident in what I speak about, even though I don’t know what I am going to speak about.”

I spent a lot of my early life waiting to feel confident enough and for that something to click in before I got going, rather than taking the scary steps of faith and cross the threshold that would trigger that thing to click in and then accessing that expanded and more confident sense of myself.

I guess what I have learned is that three things are at play here.

Firstly, get going and engage with your craft, whatever your topic, be it comedy, fiction or leadership, whether you speak, write or craft, before you feel ready

Secondly, access your courage to keep crossing that fear threshold, keep acting in faith and giving that something else the opportunity to reach you click in for you.

And thirdly, when you keep doing this consistently, not occasionally, your confidence grows and your body of work keeps expanding

I have learned that The Muse wants to find you working. When you show up, she’ll show up to meet you. But we have to be brave and act in anticipation of feeling ready, because you’ll probably never feel ready enough.

Do you need a nudge to help you show up just before you feel ready? Lets have a conversation. Drop me a line at nick@iamnickwilliams.com to arrange it

My Philosophy of Leadership
May 6, 2020
Recent Comments
Key Messages