Six lessons on inspiration, leadership and drawing the best out of yourself and others

Six lessons on inspiration, leadership and drawing the best out of yourself and others.
From Nick Williams and Liz Trubridge, the BAFTA and Golden Winning executive producer of all six series of Downton Abbey

Have you noticed how, when you are about to share your creativity or authentic voice in any kind of public arena, your nerves kick in, your fear rises and you start to feel a little vulnerable? And then either you don’t do it, or you edit and modify how you show up?

I certainly have. I used to think it was just me, a character defect on my part. Now I know recognise that this process of resistance is a pretty universal experience.

A breakthrough moment occurred for me during a conversation with my friend Liz Trubridge, who is the Executive Producer of the entire six-series of Downton Abbey, and the upcoming film.

She explained to me that as a producer of radio, TV and film for three decades, she had come to realise that everyone arrives on set feeling a little scared and anxious about expressing their creativity in their unique way. They are concerned that they may not be able to do their best work, whether they appear in front of the camera or work behind it.

She went on to explain that her job was not to judge this and demand perfection, but simply recognise it, accept it and compassionately work with this dynamic. Her goal was then to create a workplace that engages people, and enabled them to feel valued and safe enough that they can give their best.
I found that thought so inspiring, and I felt validated, and something softened in me.

I wanted to help Liz identify more of her own unique leadership style and then have a conversation with her that I could share with you. Her inspirational leadership style has been at the heart of the success of Downton, but I think also has a lot to teach of all us about putting our creative voice in to the world successfully and help others do that too. Whatever your sphere of operation is, it works better when people willingly give their best.
And the result of all those conversations is that we created this programme together.

“I believe that great things want to happen on set. My job is to help remove the blocks and create the circumstances to enable these great performances and contributions to emerge.”
Liz Trubridge, BAFTA and Golden Globe-winning Executive Producer of Downton Abbey

Audio Clip 2 – The Trill of Bringing it All Together – 1m33s 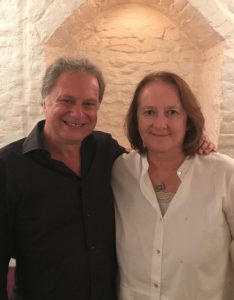 We all know that leadership is about getting results.
So whilst you might be able to get people to do what you want them to by threats, manipulation or even aggression, it is unlikely that they will willingly you their best. You might get compliance.

Another way to get results is taking the time to inspire them, build trust, understand each other, engage and encourage them, to welcome and allow fear and vulnerability, and enable them to give their best. Liz’s leadership philosophy is about how you do the second, what I have come to call inspirational leadership.

Liz is much happier being behind the camera or microphone, and is much less comfortable being seen and being front of house, and it has taken a lot of my support and encouragement to help her show up in this way.
So, for the first time ever, in this programme Liz shares how she has created a workplace that sets out to encourage and enable people, both in front of and behind the camera, to give their best, help them handle their fear, with amazing results!

The aims and outcomes of this programme:

Whist the programme is a conversation between two leaders in their fields, our goal was to share universal ideas that can be nutrients and fuel for the way we all lead, either in our own lives or in our workplace or business.
So, by listening to this programme, reading and absorbing the accompanying highlighted notes, and reflecting on the personal coaching enquiries and questions, you will gain the following:

Whether you love Downton or not, Liz’s leadership has contributed to its massive success, and what she has done on set has universal applicability to anyone who sees their leadership as being about enabling people to show up and give their best.

Liz Trubridge is a highly acclaimed radio, TV and film producer, best known for her work as an executive producer on the entire hit TV series Downton Abbey. The series has achieved global success and became the most nominated non-US show in the history of the Emmys. In 2011, it entered the Guinness Book of World Records for receiving the highest critical review ratings of any show. Liz is also the producer of the Downton Abbey film, to be released in 2019.
Liz left the BBC in 1994 to go freelance, and has many other production credits include the hit TV series Last Kingdom, The Riff Raff Element and Sex, Chips & Rock n’ Roll. She is also the producer of the acclaimed BBC dramas A Short Stay in Switzerland and A Song for Jenny, as well as From Time to Time, a film directed by the Downton Abbey creator and writer Julian Fellowes. She has also produced series two of Tin Star for Sky Atlantic.
It was her experience on Downton Abbey that gave Liz the opportunity to let her accumulated leadership experience, ideas and skills come to the fore and blossom. Her unique leadership style has proved a crucial factor in the show’s success. This is the first time that she has talked about this aspect of her work. She has also been a student of A Course in Miracles for over twenty years.

Nick Williams is a world-leading expert on inspirational leadership. Nick knows that inspiration is the highest quality fuel for achievement, much more powerful than manipulation and force. His passion is working with leaders and emerging leaders, helping them to flourish in their roles and to become a source of inspiration to others. His coaching clients have achieved amazing results: landmark hotels, TV series, pioneering schools, best-selling books and inspired businesses.
Nick is himself a best-selling author, whose 14 books include the ground-breaking The Work We Were Born to Do. He gives talks at events and conferences around the world, and has been invited by many household-name companies to speak to their employees and leadership teams, including BT, Johnson & Johnson, the Institute of Leadership & Management, BAE, IKEA, the BBC, Yahoo, MasterCard, Deloitte, W. H. Smith, the Met Police, McKinsey & Company, the Chartered Institute of Marketing, the Health and Safety Executive, the Global Leaders Academy, Yo! Sushi and Merrill Lynch. His work has been widely featured in the media, including on television and in the national press.
For twenty-one years, he was involved with the Alternatives programme in Piccadilly, London, where he met and hosted many of the leading thinkers in the spheres of creative, personal and spiritual development, such as Deepak Chopra, Susan Jeffers, Wayne Dyer, Marianne Williamson, Eckhart Tolle, Julia Cameron and Neale Donald Walsch. He has been a student of A Course in Miracles for twenty-five years.

ADD TO BASKET HERE : To order this Audio Programme